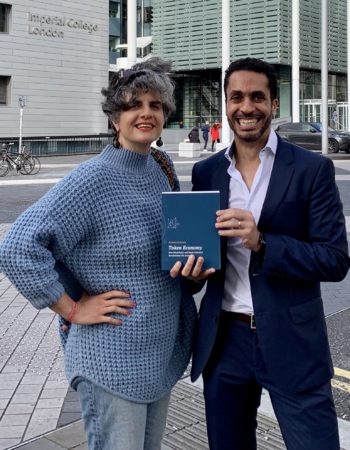 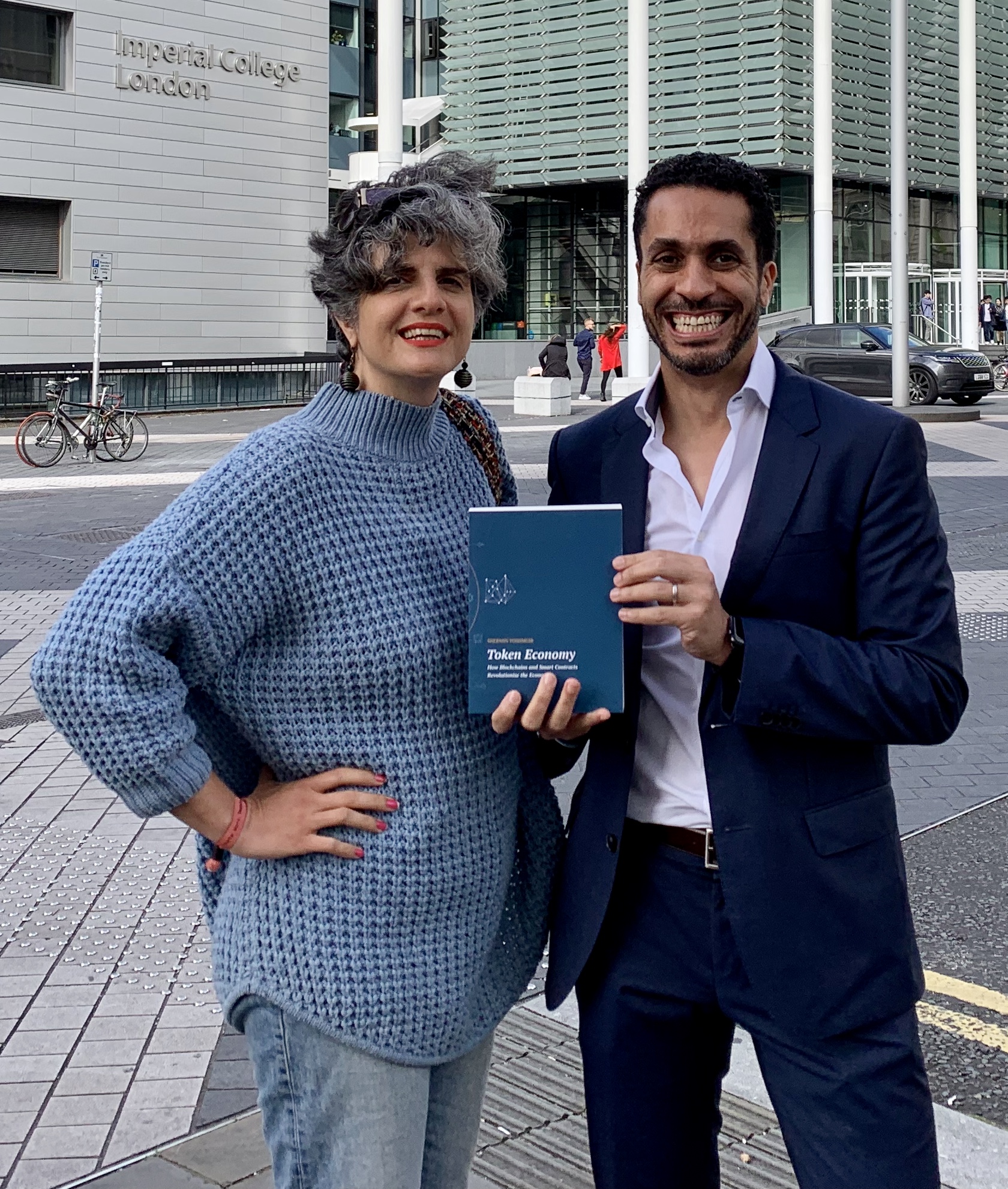 Shermin Voshmgir is Director of Cryptoeconomics Research Lab @ Vienna University of Economics and Founder of BlockchainHub which she started nearly 5 years ago. She recently published a book called the “Token Economy”.

In this podcast Shermin is going to take us through what are tokens and the token economy.

When researching blockchain, Shermin quickly realised that blockchain information was spread out on Reddit, Twitter, Ted Talks and numerous other places but there didn’t seem to be this one central repository of information. Shermin launched BlockchainHub to provide a comprenhsive source of information on blockchain.

To find out more about Shermin you can check out her site Shermin.net.

Blockchain is the driving force of the next generation internet, often referred to as Web 3.0. It’s not a front-end revolution it’s a change around the data structures in the back end of the internet.  Blockchain allows us to have a universal state layer of who did what and who owned what in terms of values or tokens. This is a completely new way of storing and collectively validating data via ledgers which are collective managed by a public or a federate network.

Blockchain is not a financial technology it’s a governance technology. 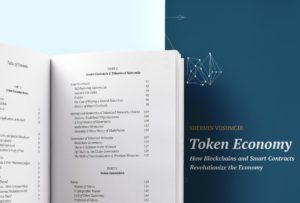 Shermin recently published her book the “Token Economy”. For her, tokens are the killer application of blockchain and smart contracts.

With the launch of the internet in the late 80s we had the information revolution. However most people couldn’t access the internet because even if they had a computer they did not have the notion of command line to operate the internet to connect to another computer.

However, when Sir Tim Berners-Lee invented hypertext it allowed everyone with even limited computer knowledge to create a visually appealing website, which anyone could now use to navigate the internet with clicking on links.

Tokens are to the Web 3.0 what HTML was to the web. Smart contracts have made it really easy to create a token with a few lines of code. At the beginning of the web a lot of the initial web sets had a “hello world” message and a bunch of links. One of the earliest use case was the search engine. Tokens are at a very similar stage. Whilst it is now very easy to create tokens most people don’t know what to do with tokens.

What is a token?

Tokens have been out for a quite a while. Prior to blockchain tokens have had many use cases from their usage at amusement parks, airmiles, gift certificate, a paper note for a fiat currency is a token, a metro / tube ticket is a token, a casino jetton is a token that can be exchanged for cash. Probably the earliest tokens in human history were shells or seeds that were used as a kind of standardised medium of exchange.

A QR code is a kind of computerised token. Cognitive psychology have used tokens. For example in the 50s there were experiments to use incentive mechanism as kind of positive reinforcement tool to change patient behaviour. Good behaviour at the hospital would be rewarded with tokens which could be exchanged for special access rights to the TV room or a special kind of food at the canteen.

Tokens have three components related to them:

Why are blockchain tokens a game changer? Blockchain networks provide the infrastructure upon which tokens can be created and managed with a few lines code with a smart contract. What needs to be determined is how many tokens are to be issued? What is the purpose of your token? What is the function of the token?

Shermin argues that it is important not to use the regulators terminology of tokens as either being security tokens or utility tokens for example. The regulatory perspective is only one perspective what is more important is to think what do they represent? Do they represent an asset or an access right to a service? A token is like a rights management tool that provides access to something you own or someone else owns. That access might be temporary, or it might be permanent until it is transferred to another identity.

For example Bitcoin, is an access token for the Bitcoin network. If you want to send transactions through Bitcoin, you have to pay in Bitcoin tokens for transfer in the network, right.

Steem is a social blockchain that grows communities and makes immediate revenue streams possible for users by rewarding them for sharing content. It has over 1 million registered users and has been operational for over three years. Both contributors and curators of content on Steem ger rewarded with Steem tokens which can be exchanged for fiat currency.

Basic Attention Token (BAT) is an Ethereum-based digital advertising token. The mission of the BAT team is to fix the broken state of the current digital advertising space in which users are unknowingly tracked, publishers are having trouble monetizing content, and advertisers are constant victims to fraud.

At the end of 2018 Shermin worked with the City of Vienna to develop a blockchain based token as part of an incentive program to reduce CO2 emissions. If you can prove that you walked, cycled or took the train instead of a car you can be rewarded with a token which can be redeem in exchange for cultural activities in the city.

When thinking of the design of the token you have to answer two fundamental question:

The individuals who are issuing the token have to answer the question what is the purpose of the token. Derived from that purpose the functionalities of the token can be designed.

When looking at a token’s functionalities the following functions need to be addressed:

Fungibility and transfer ability of a token is a design aspect. Is the token fungible or not fungible? Is it transferable of not transferable. If the token is fungible then every token is identical in value. Non fungible tokens are unique single tokens that are not identical to each other. A token that represents a Picasso painting for example isn’t fungible as it cannot be easily tradable for another painting.

Token supply is another design aspect of a token. How many tokens get issued. Are all tokens issue up front or are they issued on a timed basis? Are tokens issued upon certain behaviour or by proof of work like in Bitcoin. You could have tokens that are tied to an identity which makes them less tradeable and less liquid.

Another question would be the durability of the token. Will it expire after a while? Or will it have an indefinite use?

Once these design functions have been agreed then a regulator can evaluate the tokens and determine whether the token has properties of money or properties of a security.

The more interesting use case for tokens is around identity tokens. Tokens that represent assets, like real estate or art. For example very few people an afford to buy outright a Picasso. However with tokens we can now tokenize the Picasso, we fractionalize it and create cryptographic derivatives of it. In other words you could become a fractional owner of a Picasso painting without needing to buy the whole painting.

Real estate can be tokenised and fractionalised. An apartment for example can be fractionalised between two people and a token contract can be issue via a smart contract to handle the monthly rental payments.

Purpose driven tokens that enable complex networks. For example the CO2 token with the City of Vienna. Token curated registries where you can create lists of the best universities for example. Shermin recognises that we are still in the very early stages of what this token economy can bring us.

Bitcoin itself is a purpose driven token to enable a peer to peer financial network. Bitcoin is a peer to peer payment network which without the absence of intermediaries all peers who don’t know each other nor trust each other to transact. The protocol rules of Bitcoin incentivizes the network actors to valid transactions with tokens. If you bring productive activities to the network, you get rewarded with Bitcoin tokens. Proof of work makes it unfeasible to cheat the network as it is extremely expensive to do so.

For Shermin, Bitcoin represents the first time in history were we found a mechanism to incentivize an individual towards achievement of a collective goal. The Bitcoin network is a public payment network for a public good. In the past public goods were provided by centralised authorities, like a city or state. They were subsidised through taxpayers money. And for the first time, we found an economic mechanism to incentivize the individual to provide to a public good in the absence of intermediaries. 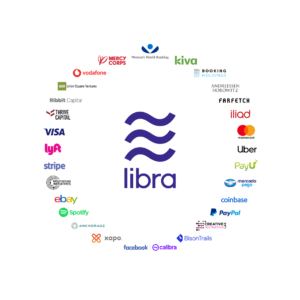 In Shermin’s opinion, the Libra Association was in a way Facebook announcing that the Web 2.0 is over and that the Web 3.0 is coming and we want to be at the forefront of it. What they have announce is a stable token.

Facebook essentially said – well, we have 2.4 billion users, many of which are underbanked, that we have worldwide, the numbers are roughly 2 billion people that are underbanked or at least a considerable fraction of them.

Facebook is could become a payment provider to these unbanked, a kind of shadow bank through offering the Libra token. Facebook is working with a number of private companies and some NGOs in building the public infrastructure which will be managed by the Libra Association registered in Zurich, Switzerland.

Shermin believes that they’re most likely planning to launch a reputation token and an attention token.