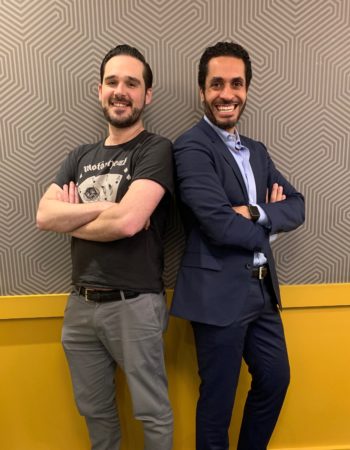 Ep.43 – ‘Mutualisation’ of insurance through blockchain – insights from Nexus Mutual 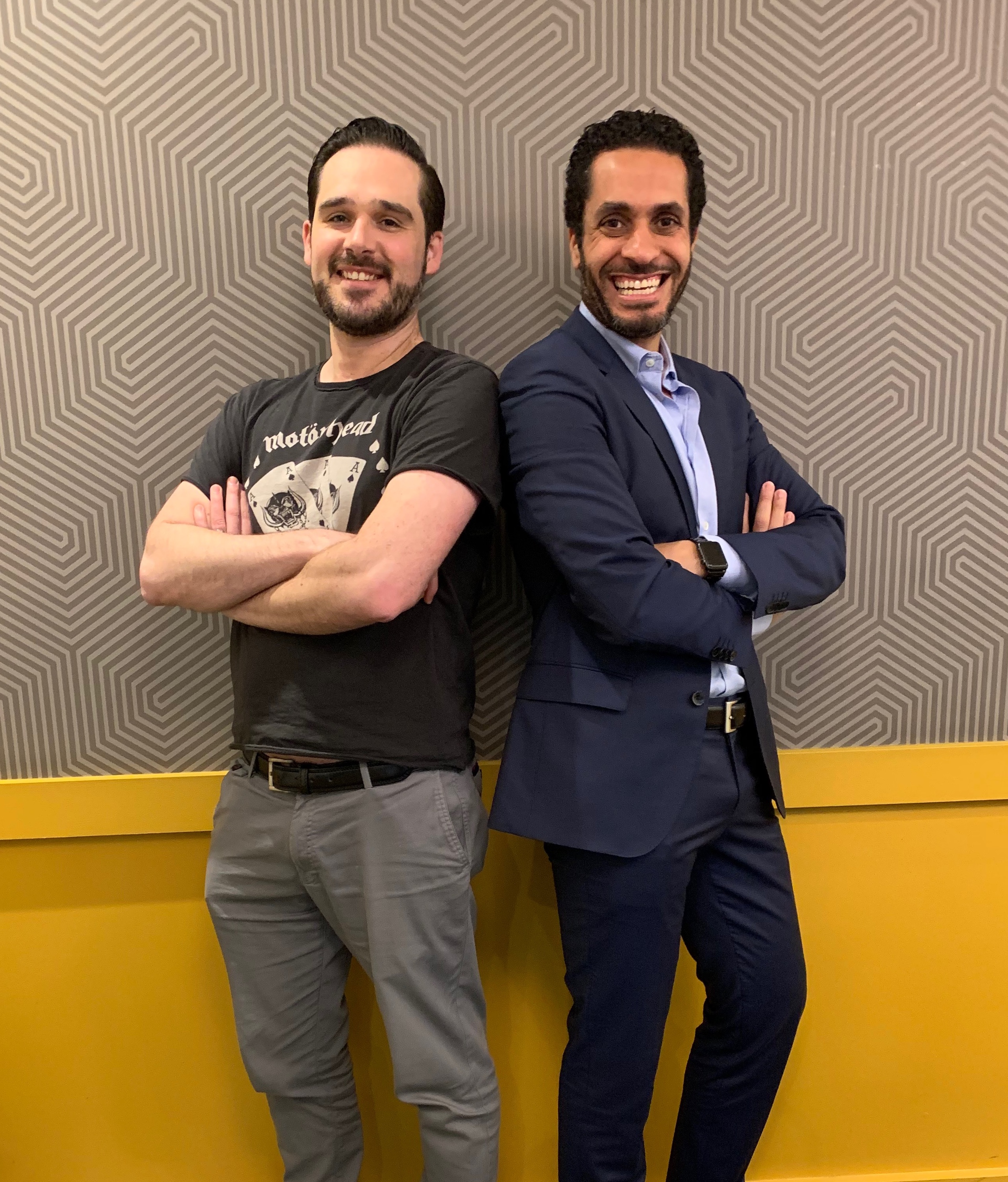 Last week we had the pleasure to talk to Hugh Karp, founder of Nexus Mutual, about their insights on how blockchain and smart contracts can be used for building effective insurance mutual. This is Hugh’s second appearance on Insureblocks as he was a guest blogger last September where he penned a post on “Public Blockchains in Insurance: Do incumbents need to worry?”

Hugh believes it is more interesting to focus on what the technology enables instead on focusing on the technical description of it. Blockchain gives a shared view on some sort of information, so that everyone can agree on the information and that it can only be changed by playing by the rules.

Once we have shared information that all parties can agree on, and self enforcing rules, we can coordinate human activity in ways we couldn’t do before. What is key is that this can now be done more efficiently than ever before and without a central regulator.

Mutuals are the original insurance structure. They arose because communities recognised that they had a shared common risk and that they would be more resilient if they spread this risk out within the group. These communities would pool resources together and decide as a group when a claim will be paid. If no claims were made then all the members benefited.

This is a stark difference to traditional insurance companies whose interests aren’t aligned to those of its customers. Shareholders driven by profit by not paying out claims. Mutuals are member led and have a shared goal thus reducing the risks for conflicts of interest.

So what about regulators? Aren’t they meant to reduce those conflicts of interest? Hugh believes that in well developed countries that is the case but it comes at an administrative costs. In developing countries though many people don’t always have a reliable legal and regulatory system on which they can rely on.

What is Nexus Mutual?

Nexus Mutual uses the power of Ethereum so people can share risk together without the need for an insurance company… ie bring back the true form of mutuals where individuals contribute to an insurance like entity and group together to protect themselves. Nexus Mutual uses blockchain to reengineer the business model.

The role blockchain and smart contracts play in building a mutual?

How does it help to scale trust and capital? Mutuals have traditionally struggled to compete with shareholder insurance companies. Expanding outside of their original community group is challenging for a mutual. Hugh exemplifies this problem with an example of where one village may not trust the elders from another village to pay out their claims. Thus blockchain can be helped to scale out trust because instead of having to trust that other group of people you simply have to trust that the code works as it is intended.

The other, less well-known issue, that mutuals face is the scaling of capital. Due to how they are structured, mutuals can only raise money from their membership base, and have limited access to capital markets.  As insurance is capital intensive it does put limit a mutuals growth.

Hugh believes that due to their decentralised characteristics mutuals can only be built on a public blockchain (e.g. Ethereum) instead of a private one (e.g. Hyperledger and Corda). This ensures that the funds are collectively held on a smart contract instead of in a central location. Member driven and member owned.

Nexus Mutual is building the initial set of governance, the rules, by which the members of the mutual agree to abide by. Examples of such rules are how many tokens they need to acquire to do claims assessment and how many they need to destroy to purchase cover. Additionally if members participate in the system fairly they get rewarded with tokens if they participate unfairly they get punished. This creates the aligned incentives to make the mutual work.

Members can join that mutual based on those initial set of rules. Members can then vote to change the rules if they wish.

How do you avoid members of the community behaving like a traditional shareholder-based insurance company? How do you avoid them keeping the profits instead of paying out claims?

Nexus Mutual ensures that the rules and incentive structure are set up in a manner that is at least as good as those of a regular insurance company. For members to participate in claims assessment they have to place a bond before they vote. If they vote with the majority they earn rewards. If they vote fraudulently their bond can be destroyed. This system was rigorously tested via a third party utilising AI agents that have undergone a machine learning process.

Smart Contract Cover is the initial product Nexus Mutual will be launching with. This covers smart contracts, written on Ethereum, from the risk of having bugs or hacks that can lead to financial loss. This is recognised as the biggest risk within the Ethereum community as evidenced by two previous hacks:

It’s a very niche product for the Ethereum blockchain only as Nexus Mutual is a crypto only platform. Cover can be purchased in Ether and/or in DAI. DAI is a stable coinlinked to the US dollar that doesn’t experience the volatility typically seen in crypto.

You can have a play around with their Smart Contract Cover on their Alpha Demo. 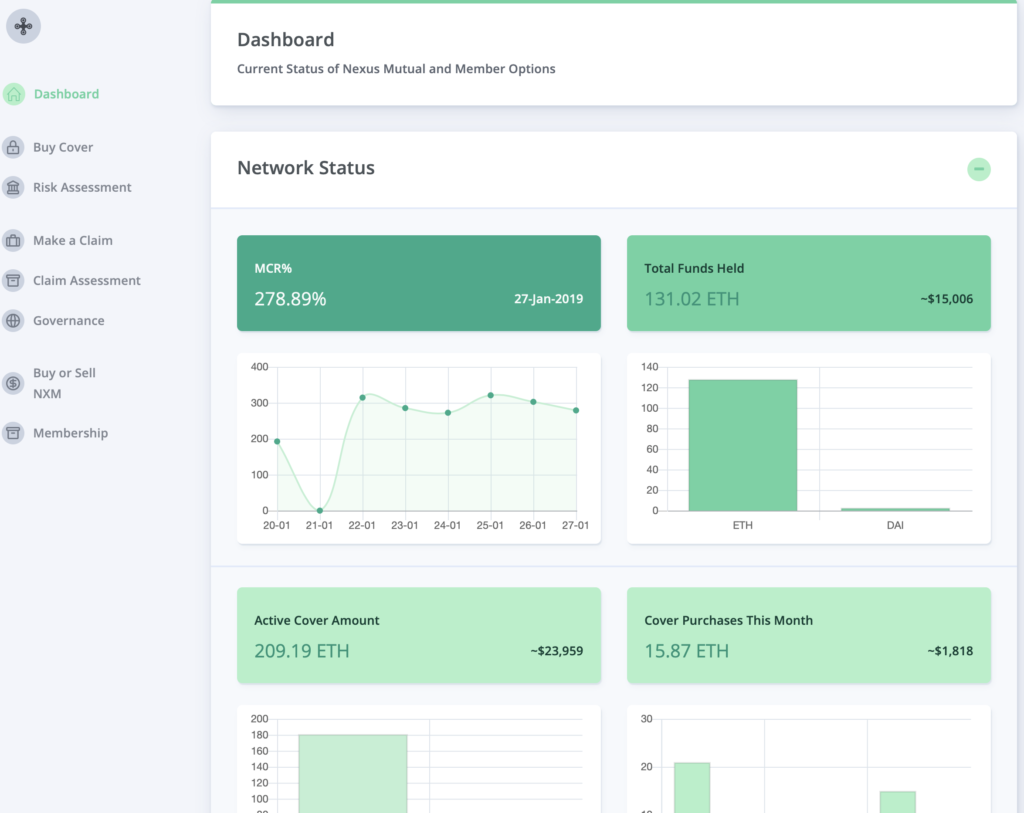 Nexus Mutual applies the highest level of security practices to its smart contracts and run audits and testing. For their launch they will have a small relative amount of funds to start with to minimize losses if something was to occur. Their smart contract code also has an emergency pause functionality should something go wrong so that they can stop the contracts. All smart contracts have timing windows and delays to control the amount of money that can come out.

Due to the limited availability of data, Nexus Mutual has created a market based mechanism where the crowd sources the price of the risk.

This works on a two tier pricing approach: The first tier is quite common. It’s an algorithm that determines how battle tested the code is, how long it has been on mainnet, and how often has been it hacked. This works for quite a few smart contracts but not for all. The second tier, is where Nexus Mutual allows any members of the mutual to stake value or place a bond against specific smart contracts that they think are secure. In return the members can earn a sales commission when someone buys cover on that contract. Thus the more the members stake the lower the price of cover.

Hugh recognises that his first focus is to prove Nexus Mutual’s business model and get some initial scale. Once they have reached those goals they plan to open up their product offering and include ones such as natural catastrophe covers as have a massive global under insured problem. Nexus Mutual’s cost efficiencies will enable people to get cover with small limits.

Hugh has provided some excellent insight into how blockchain and smart contracts be used to build insurance mutuals.

If you liked this episode, please do review it on iTunes. If you have any comments or suggestions on how we could improve, please don’t hesitate to add a comment below. If you’d like to ask Hugh a question, feel free to add a comment below and we’ll get him over to our site to answer your questions. To find out more about more about Nexus Mutual and their aim to becoming an alternative risk sharing platform you can read their whitepaper.